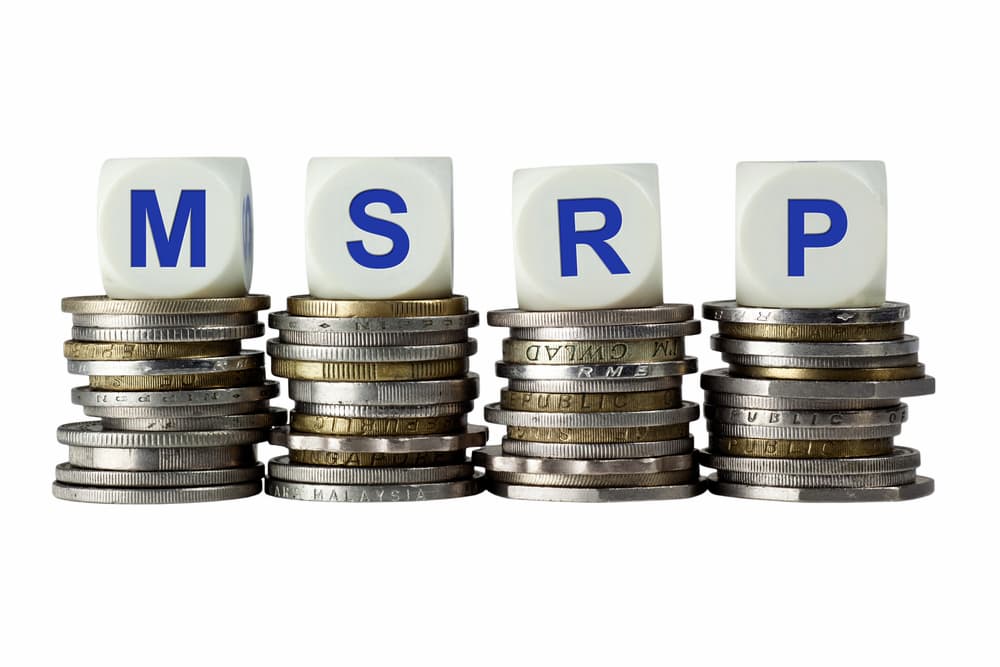 As you read about MSRP, you'll learn:

Short for Manufacturer's Suggested Retail Price, the MSRP of a vehicle is the price at which the manufacturer thinks it should sell. It might also be referred to as the "list price" or "sticker price." Other types of products might have MSRP listed, but it's most commonly seen when you're shopping for new cars. The term can seem confusing, especially considering it's used in slightly different ways than "invoice price," "base price," and "transaction price."

Since the MSRP comes from the manufacturer, individual dealerships don't really have much say in it. The manufacturer considers things like the cost of manufacturing and delivering the vehicles, as well as the average markup at dealerships. From there, the dealership can determine if they want to ask for the MSRP or not.

The dealership's decision about whether or not to ask for MSRP also depends on a few things, mostly related to supply and demand. If a vehicle is selling extremely well and only a few remain, the dealer can ask for more. If the vehicle isn't selling well, the dealer may be willing to go lower. A dealer may also get a better deal from the manufacturer if they buy in bulk, which allows that dealer to pass those savings along to the customer. In most cases, vehicles sell for below the MSRP.

What Is a Car's Base Price?

The base price is essentially the MSRP for the most inexpensive level of a car. In other words, it's the price for a vehicle in the lowest trim level, with no added features or options packages.

What Is a Car's Invoice Price?

What Is a Car's Transaction Price?

Where do I Find the MSRP?

The MSRP is one of the easiest prices to find for a vehicle. You can find it online by visiting the manufacturer's website or on many other automotive sites. The dealership also has this information on hand, so they can walk you through it. In many cases, you will be able to see it by looking at the pricing sticker in a car's window on the lot.

The Problem With Suggested Pricing

The biggest problem with MSRP is that some car buyers think that's the best price they can possibly get. They might walk into the dealership, confuse the MSRP with the invoice price, and think that they're essentially getting the car from the dealership without any markup. The dealership will always be happy to sell the car for its MSRP because that price already has a markup boiled into it.

Instead, it's better to find out the invoice price and set that as your target. The MSRP is what the manufacturer wants the vehicle to sell for, but the dealership still makes a profit if they sell the car for above invoice price. In some cases, the dealership actually benefits from selling the car at or even below invoice price as well, but those situations aren't quite as common. At any rate, don't be afraid to negotiate and even try multiple dealerships if that's what it takes to get the best deal on a new car.

How to Get the Best Deal on a New Car

The best deal on a new car is the one that works for you. You might not set the record for the lowest price ever paid for that specific model, and that's ok because there are so many factors that ultimately go into the price you can get. If you do your research before you go to the dealership, negotiate with the salesperson by advocating for yourself, and refuse to pay more than the price you've decided is a good deal, you will end up leaving in a new vehicle that you got a great deal on.

The entire process is also easier when you work with a trustworthy dealership. Valley Chevy dealers, for example, pride themselves on creating educated buyers. When you find a dealership near you, you can expect honest communication about price.

As you prepare to buy a new vehicle, you may have a few common questions about MSRP and related subjects. The dealer should be happy to answer all of your questions and point you toward any resources you need. In the meantime, here are some of the most common questions we hear.

Simply put, a fair purchase price is one that satisfies all parties involved. The dealership wants to remain profitable to stay in business and pay their employees, and you want to get the best deal on a new car. The key is to make sure you're doing business with a dealership that makes it feel like they're working with you instead of working against you. Just because it's a negotiation doesn't mean there's a winner and a loser – everyone should walk away happy about the deal.

What Does MSRP Stand For?

Is MSRP the Best Price I Can Get?

No! There may be very rare circumstances where dealers will want to sell their vehicles at MSRP (such as in cases where there is limited supply and incredible demand), but that is extremely rare. Most vehicles sold go below MSRP, and we do not recommend paying the full list price on a car. Work with the salesperson to see how they can get you a better deal.

Is MSRP Important for a Lease?

The MSRP doesn't directly show up during many lease negotiations since you aren't buying the vehicle outright, but the lease price is often derived from the MSRP in some way. The same kind of thinking applies when you want to get the best deal on a lease. The listed price isn't likely to be the best possible price, so work with the dealer to get a deal.

Scottsdale, AZ
See your Participating Valley Chevy Dealer. Pricing does not include tax, title, license, and doc fee. See dealer for details.
Your health and safety are of the utmost importance to us. Learn what we're doing in response to the COVID-19 pandemic. LEARN MORE
+